Brief biography — who is Vasily Skakun? 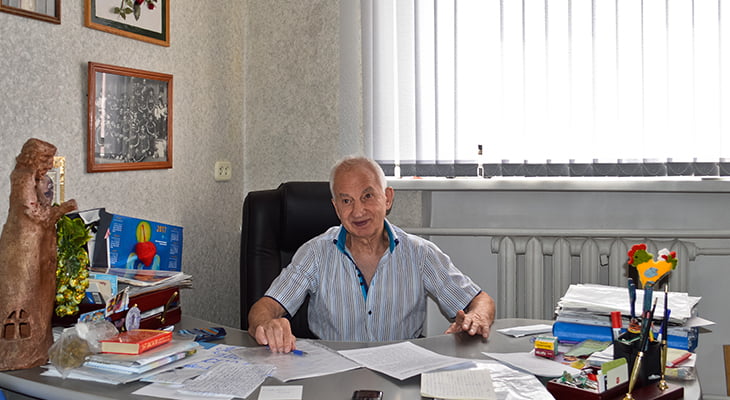 The horse Vasily Alexandrovich was born in 1944, during the difficult war years, the last and not very long-awaited child, and all his life, according to him, justified his birth, thanking both the Universe and his parents for this chance.

He performed his first somersaults on the generous dusty reserves of the village of Petrovsky, putting a winter hat with earflaps under his head, and counting on the help of faithful telegraph poles, always ready to support in a headstand.

The first teacher — coach Mikhail Strakhov came into his life when the student was probably ready. In parallel with training in acrobatic jumps , Vasily Alexandrovich graduated from the Faculty of Physical Education of Pedagogical Stavropol Institute, where he was accepted not immediately, but only after a six-month candidate experience.

Now he has his own sports school, the leadership of which he handed over to his son with a calm soul a year ago. Vasily Alexandrovich is a candidate of pedagogical sciences, who has brought up 18 absolute world champions, almost the entire Russian acrobatic jumping team hails from the Stavropol sports school.

Athletes from other countries, which are not always «friendly», often come to the school for the feeling of a friendly experienced shoulder, but all artificially erected barriers that do not really exist are erased here.

Next to the school there is a workshop for the production of sports equipment, patented by the company «SkakunOriginal», known in different countries of the world.

But the most unique brainchild of Vasily Alexandrovich is the Academy of Health. If foreign guests come to Stavropol, they are necessarily taken to the gym, where 200-250 adults, and sometimes very adult people (the oldest of them, Zoya Evdokimovna Marinich, a participant in the Great Patriotic War, a partisan — 93 years old), who come to improve their health, to orient themselves at times, are engaged in the break between acrobatic trainers of children the tangled labyrinths of life. The Academy of Health, like every living organism, is in constant development — new directions appear, new traditions grow. But one thing remains unchanged — all classes are held for free, otherwise true knowledge is not transmitted. The Academy of Health lives according to the principle — «By helping another, I heal myself.»

Vasily Aleksndrovich forms his philosophical reflections on the formation of a person, which are saturated with sports activities, into four weekly articles. The most relevant of them are published in the Saturday issue of the newspaper «Evening Stavropol», where he leads the column «Facets of being». And twice a year, since 2007, his books — collections of articles have been published, as a rule, their presentation is a big city holiday that gathers all interested citizens.

Vasily Alexandrovich also has his own viewers, the program «Philosophy of the Horse» is published weekly on the YouTube channel.

Vasily Alexandrovich was awarded the Order «Badge of Honor» and the badge «Knight of Good Will». With different requests — big and small, the wrecked in life’s perepitii are waiting for him before the start of classes., and for everyone there are sympathetic eyes, a word, a shoulder… And that ‘s probably why he is an honorary citizen of the Stavropol and Svetlograd. He does not wear these titles with pride, but with an even greater share of responsibility. In his small homeland (Svetlograd), he opened one of the first branches. He has been conducting classes there every week for 6 years. In total, the branches of the Academy of Health have exceeded two dozen. Every year, the Academy holds seminars to train instructors who are ready to open branches in their cities and villages and, most importantly, open their hearts to people and therefore become happy, like their mentor, Vasily Alexandrovich Skakun.